I stumbled upon this bucket style of hat one evening while relaxing in my rocking chair. Crocheting is so relaxing, and stumbling upon a new design is so exciting. The color combinations are endless.

The silk artificial daisy on the side has a crystal center that is securely sewn in place. You will find a tutorial at the end of the pattern.

I love the pink rows of mini popcorn’s. This would look great using any other variegated yarn. Use the pattern below to make this easy to wear hat for you or someone special.

Important note: “H” hook is what you will use to achieve a size 12mo-4t sized hat, and the “J” hook will give you the larger sizes.

Mini Popcorn = yo pull up loop in nxt sc, using that loop only and leaving original loop on hook, ch3, pull loop through both loops on hook.

in sp. = execute st. by going under the CH that is creating the sp. Do not execute st. directly into a CH

With Camo or MC, Ch3 (ch4 for beginners) and slpst in first ch to form a ring.

Do not complete Rnd. 5 if making 12-24 mo. Or 5t-preteen(adult extra small) and adjust numbers accordingly.

Rnd. 9: (CROSS STITCH ROW) ch 3, cross back to last sc of previous row, to make first crossed stitch, then proceed [Skip 1 sc, make 1dc in next sc; 1dc in skipped sc;] (this will make the CROSS STICH) Repeat what is between the brackets over the next 50 sc, drop camo or MC to the back, and pick up pink or CC, slpst in top of ch3
(30 CROSS STITCHES)

Mini Popcorn Round
Rnd. 11: ch1(counts as 1st sc) yo pull up loop in nxt sc, using that loop only and leaving original loop on hook, ch3, pull loop through both loops on hook (1st mini popcorn made) sc in nxt st, pushing the mini popcorn to the front. *mini popcorn in nxtst, sc in nxtst * 13x; mini popcorn, slpst in first sc or ch1. (30 mini popcorns)

Using a purchased daisy, take it off the stem. It will pull off with a little effort.

Take the plastic parts off of the flower, keeping the flower petals together as they were on the stem

Use a purchased Rhinestone that has holes drilled in the sides for sewing in place. This is really a button with the holes on the side.

Notice the holes on the side of the stone for sewing in place. Then using needle and thread sew onto hat in place desired, going through all of the petals. It is easiest to insert the needle from the bottom beside the stone, and then insert the needle down into the hole.

Make sure to visit these links if you are looking for beautiful crochet patterns that will inspire you and for patterns with a vintage flair.

My ETSY shop is right here!

This pattern is protected by copyright© Krissys Over The Mountain Crochet 2020 Do not sell, alter or redistribute this pattern in any way or form. You have my permission to sell your finished product, but you are responsible for the finished product

Let me know if you make this hat. I would love to see it! Come to my Face Book Group to show me your photos.

This site uses Akismet to reduce spam. Learn how your comment data is processed. 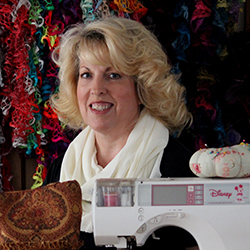 Hello! I am so glad you are here!

I am a happy mother of 5 children, and 4 grands. I live just “Over The Mountain” on a lovely, narrow country road in the Appalachian Mountains. Stay awhile, and we can talk about crochet , crafts and other things that are happening on "My Side of the Mountain".